This month, our industry correspondents in charge of eKomi StarInsights are focusing on, Spain’s Retail Industry. Today’s StarInsights is the second in a series of several reports exploring various sectors within the retail industry.

In Part 1 of our series focusing on Spain’s Retail Industry, our correspondents reported on a selection of companies within the consumer electronics sector with the highest quantity and quality of ratings and reviews. We also provide specific details regarding Spain’s current economic and political situation, the emerging trends of retail consumers, and a future-focused strategic roadmap looking forward to 2020. To learn more, we highly recommend reading, Part 1: The Consumer Electronics Industry.

This edition of StarInsights is dedicated to Spain’s Retail Industry while focusing on the Apparel sector.

Globally, apparel is among the most successful sectors in the Retail Industry. Unlike other Retail sectors, Apparel has seen constant and steady growth since the global financial crisis. However, as technology becomes more innovative and consumer behavior continues to evolve, apparel retail chains are closing their stores at a record pace. As ecommerce giants such as Alibaba and Amazon continue to break records through online sales, others in the industry are searching frantically for answers to this online shopping movement. Looking towards the future, our correspondents will discuss what has been done already, and what needs to be done if retailers want to stay competitive in the Apparel sector.

The United States is being exposed to a retail crisis that is expected to be fatal for the majority in the Apparel Industry. As the world’s largest consumer market, the United States is a great place to look to find future trends in consumer behavior and new purchasing habits. The bursting of the United States retail bubble is predicted by experts to be a hint of what is soon coming to the rest of the world. “The U.S. market is oversaturated with retail space and far too much of that space is occupied by stores selling apparel”, said Richard Hayne, CEO of Urban Outfitters. During the 1990s and early 2000s, the U.S.retail market was over-ambitious by adding thousands of stores. This retail space is more than six times that of Europe or Japan. By having so much retail space the U.S. created a bubble, and this bubble has finally burst.

The retail crisis has resulted in stores closing at a record pace. It is predicted that by the end of this year, 8,640 U.S. stores within retail will close (See Figure 3). Not even the biggest names in retail, regardless of their size, have been able to hide from the bubble bursting. JCPenny will be closing 140 of its stores (14%,) Macy’s is closing 100 stores (15%,) and HHGregg is closing 40% of its stores as they prepare for bankruptcy. According to Credit Suisse, 1 in 4 of all U.S. malls will close by 2020.

Just a year ago, every major retailer confidently believed that all of their stores were profitable, and blamed their merchandise strategies for the poor performance in 2016. Very few of the largest and most well-known brands in retail publically stated that they made a mistake by not focusing more on ecommerce. Those same retailers are all reconsidering their strategic plans from just last year, and have all come to the same conclusion. For the first time in the industry, every retailer is looking at the same data and the same evolving consumer trends to all mutually agree to shut more of their doors. 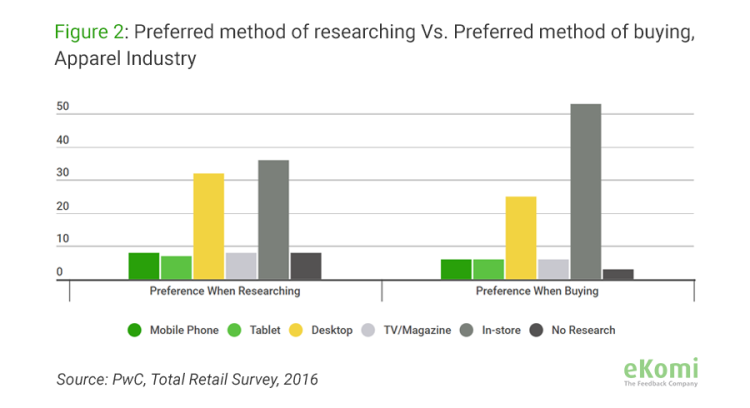 Articles with titles such as, “Death by Amazon”, “Amazon Survivors”, and “Amazon’s Retail Apocalypse” are becoming increasingly popular in 2017. Despite the apocalyptic undertones, these articles are far from being inappropriate and reflect a mutual feeling around the retail industry. That feeling being, fear. Amazon is currently worth more than $500bn and has recently been forecasted by Morgan Stanley to be worth roughly one trillion U.S. dollars by next year.

This collective feeling of fear caused by Amazon is becoming much more than just a threat. Amazon’s proven success and optimistic future have brought a great deal of chaos for all retailers, especially the traditional brick-and-mortar retailers. This disruption is called the “Amazon Effect.” As Amazon continues to invest billions in new opportunities, the ecommerce evolution will become more drastic and influential in the near future.

In 2016, Amazon had more than 310 million active customer accounts throughout the world. With a customer base just as large as the United State’s population, this feat is just the beginning for the ecommerce giant. The highest priority for Amazon is to not only attract new customers but to, more importantly, retain those customers. Amazon was among the pioneer platforms to leverage the power of reviews, providing a constant feedback loop that enables the retailer to become one of the world’s most trusted retail platforms. Currently, customer feedback is an integral part of Amazon strategy for growth and fostering customer loyalty. Granting clients an access to reviews helps not only increase the value of the purchase but also helps them make more qualified decisions which decrease returns.

Since the introduction of “social proof” many companies in the Apparel Industry have also adopted customer feedback as part of their growth strategies. eKomi has been a leading provider of cutting-edge technology for ratings and reviews collection within the sector. Our expertise in the field has brought a vast success to our clients and continuously foster loyalty and trust into their businesses.

This edition of StarInsights will cover Spain’s Apparel Industry 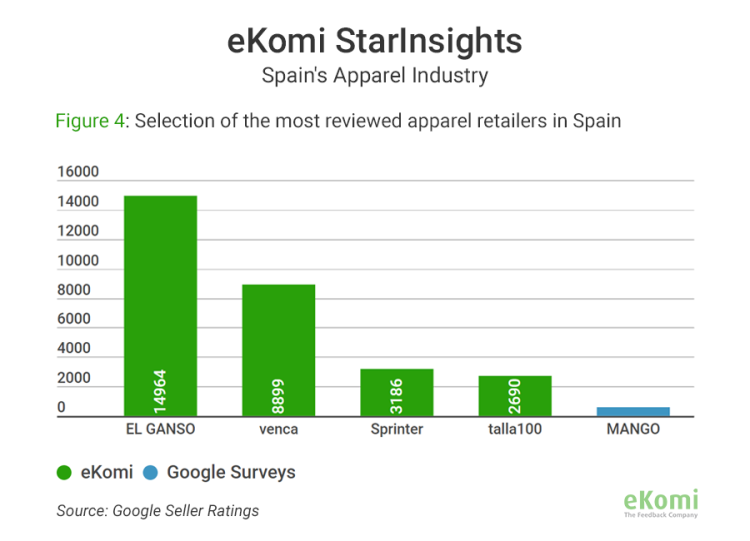 El Ganso is the leader among the selected companies from Spain’s Apparel Industry which are featured in this edition of eKomi’s StarInsights. With a 4.4 star rating and 14,964 reviews collected within the last year, El Ganso is above and beyond the rest of its competitors in regards to reviews.

Following El Ganso is Venca with 8,899 reviews collected. The company also earned an average rating of 3.9 out of 5 stars. Next in line is Sprinter, with 3,186 reviews and a star rating of 4.7. Finishing 4th is the eKomi partner, Talla 100, with 2,690 reviews. Despite the number of reviews collected, Talla 100 is tied with Sprinter as the highest rated companies in Spain’s Apparel Industry.

Of the leading apparel retailers in Spain, only one retailer is not an eKomi partner. Google Survey’s client, Mango, received the least amount of reviews with just 591 this past year. Within Spain’s apparel industry, eKomi has an overwhelming majority of total reviews collected. eKomi gathered more than 29,739 reviews this past year, while Google Surveys gathered 591. (See Figure 6)

Several leading apparel retailers from Spain such as Bimba Y Lola, Massimo Dutti, Zara, Decimas, and Malababa were not featured in this edition of StarInsights as they do not collect ratings and reviews.

The importance of online ratings and reviews is rapidly increasing in the apparel retail market. We hope this report will continue to foster the power of customer feedback within the industry and help promote the use of innovation as the way towards growth stimulation.

Customer expectations are soaring. Despite recent trends of more consumers preferring to shop online, the physical store should not be forgotten. Amazon has recently acquired Whole Foods, an American grocery chain, for $13.7bn. Amazon is primarily known for ecommerce, and by purchasing the grocery chain they have brought vast confusion across the world.

As customer expectations begin to evolve, so are the innovative ways that companies are approaching these expectations. Of the most innovative strategies in retail has been IKEA’s virtual reality shopping experience. The project is called, Virtual Reality Kitchen, IKEA VR Experience, and is a pilot test for more to come from the Swedish retailer.

There are many other ways to improve the overall shopping experience as well. PwC’s recent study found several changes that a retailer could make to improve their physical stores. Among these changes were: sales associates with a strong understanding of the products (40%), ease of checkout (35%), ability to check product availability at another store/online (32%), creating an effective atmosphere (23%), and in-store Wi-Fi (22%).

eKomi promotes the importance of CX. By partnering with eKomi, our technology will provide customer intelligence that will give you insight as to what your business truly needs. Our data can help establish the foundation of what your physical store should be using based on the reviews and feedback from your own customers. We can help you avoid risks and spot opportunities to help shape your customer experience and strategies looking towards the future.

2. The Influence of Social Media

eKomi understands the importance of Social Media. Caring greatly about our partner’s brand, we support the efficient use of Social Media to build your online reputation. Using our technology can enhance your strategies by taking advantage of the customer intelligence we provide. To embrace the cross-channel experience, our technology is available on various devices. From our SMS review collection methods to our new fully-customizable Point Of Sale App, our Solutions remain as convenient for you as you’re on the go.

Promoting your reviews on Social Media is also a great strategy to enhance the value of your business or product. Taking advantage of your best reviews will generate positivity around your online reputation. From trust seals, review widgets to even awards and badges, eKomi can help reinforce this strategy.

For more information about eKomi Solutions, schedule a meeting with us here.

Previously in this series

Exciting news: eKomi - The Feedback Company just acquired 100% of Dutch market leader Klantenvertellen from Youvia. This means over 9.000 new customers in the eKomi Group & a fantastic new team in the Netherlands!
Loading Comments...
%d bloggers like this: