This month, our industry correspondents in charge of eKomi StarInsights are focusing on, Spain’s Retail Industry. Today’s StarInsights is the third in a series of several reports exploring various sectors within the retail industry.

In Parts 1 & 2 of our series focusing on Spain’s Retail Industry, our correspondents reported on a selection of companies within the consumer electronics and apparel sectors with the highest quantity and quality of ratings and reviews. We also provide specific details regarding Spain’s current economic and political situation, the emerging trends of retail consumers, and a future-focused strategic roadmap looking forward to 2020. To learn more, we highly recommend starting at, Part 1: The Consumer Electronics Industry and Part 2: Spain’s Apparel Industry

This edition of StarInsights is dedicated to Spain’s Retail Industry while focusing on the Footwear sector.

As globalization expands, competition in the global footwear market is continuing to intensify as well. New threats are beginning to challenge Spain, Italy, and Portugal’s statuses as the European powerhouses of the footwear industry. When combined, the three EU members account for roughly two-thirds of total European footwear production, and this growth is expected to increase significantly looking forward.

Spain’s footwear industry is expected to grow by a tremendous 3.5% in 2018. Out of all EU members, only Romania, Ireland, and Poland have higher expected growth rates. Overall, Europe’s footwear industry is expected to grow by 1.5% each year between 2017 and 2021. Despite this optimism, Europe is still being challenged by larger foreign companies producing shoes at a lower cost. With Asia representing 87% of the world’s footwear production, European countries are beginning to explore trends such as eco-fashion footwear, changing lifestyles, and technology to remain competitive within the global market.

Ecommerce giants are dominating the global footwear industry. Companies like Amazon and Alibaba are at a great advantage due to economies of scale, big data, and cutting-edge technology at their disposal. These advantages are influencing the entire industry with ease. From how consumers are shopping to their constant-evolving behavior within the market, shoppers are holding retailers to the highest of standards Convenience, price, engagement, and speed are what consumers are looking for from retailers before giving their loyalty to a brand. This loyalty is not as easy to create as it once was in the past.

According to a report published by, PwC, online shoppers choose their favorite retailers because of convenience and price. Specifically looking at Spain, 48% of those surveyed said that they shop online because it is convenient and 43% shop online because it is cheaper. Those who were surveyed proved that consumers are constantly looking for deals, and would even purchase out of their own country if that meant finding those deals.

Asia is taking advantage of these foreign consumers looking for the best. At a country level, China is the ultimate leader in the industry. Producing roughly 6 out of every 10 pairs of shoes throughout the world, China is leading the production race. With innovative technology, China has been able to rapidly increase production, while pushing efficiency and reducing labor.

Operating worldwide in 26 countries and with over 15,000 partners, eKomi is highly experienced dealing with international companies. Through eKomi’s innovative technology, we enable our partners to improve their ad CTR by up to 17% while increasing overall visibility. By gathering and publishing reviews, eKomi increases trust while driving more traffic to your site. Our technology can help increase the number of international customers that you have.  To find out more schedule an appointment with us here.

Digital sales are dominating this holiday shopping season. Overall, online sales from this weekend’s, “Black Friday,” grew by 17% from just last year to generate a record-breaking $5.03bn. According to Salesforce’s retail intelligence unit, 42% of all Black Friday online orders were purchased on a smartphone. This was an increase of 29% when compared to last year. Desktop or laptop computers accounted for only 49% of online purchases. This is the first year that computers did not account for more than half of all online purchases. 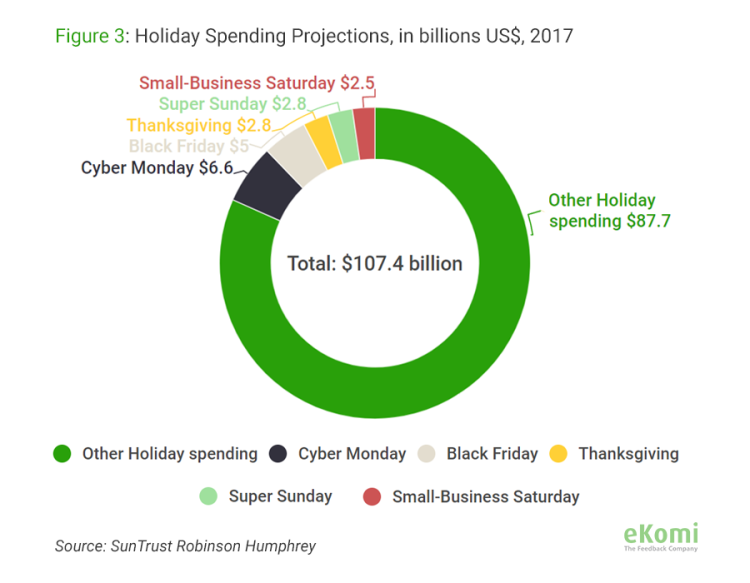 Surprisingly, despite the rapid increase in online shopping, in-store traffic fell less than 1% on Black Friday. This was a huge shock for analysts of the retail industry who predicted a more significant decrease. This proved that physical retail stores still have great influence on the market, and are capable of being profitable for retailers despite the majority now choosing to shop digitally.

Cyber Monday has hit a new record of $6.59bn according to a report released by Adobe is the most spent online in a single day for the United States. This is a 16.8% increase in revenue seen last year in 2016. Also, revenue generated online by smartphones broke a record with $1.59bn in total sales.

This edition of StarInsights will cover Spain’s Apparel Industry

For this edition of eKomi StarInsights, Zacaris proved to be above and beyond the rest of its competition within Spain’s Footwear Industry. With a 4.8 star rating and 14,762 reviews collected within the past year, Zacaris is heading into 2018 with great momentum.

Following Zacaris is Pisamonas with 10,950 reviews collected. The company also earned an impressive rating of 4.8 out of 5 stars. Following next is, Unisa, with a star rating of 4.7.

The leading footwear retails selected for our study are all partners of eKomi, and we are proud to collect and publish the majority of reviews in Spain’s Footwear Industry. From the selected retailers, eKomi has collected a combined 28,341 reviews for the footwear retailers this past year.

Finishing in 4th is eKomi partner Shedmarks with a star rating of 4.7 and in 5th is Masaltos with a rating of 4.3.

Several leading footwear retailers from Spain such as Décimas, Marypaz, Ulanka, and Mustang were not featured in this edition of StarInsights as they are not currently collecting ratings and reviews.

We hope this report will continue to foster the importance of reviews and ratings within the footwear industry and help promote the use of innovation to contribute to the economic and social development in Spain.

Next month, Catalans are set to vote in their regional election to determine the outcome of their declaration for independence. Recently, the Spanish government cut its growth forecast from 2.6% to 2.3% for 2018 due to the political crisis taking place. If voters are willing to return to constitutional order after the election, Spain has the opportunity to see a growth rate of 3% for 2018. If not, Catalonia will be vulnerable to a stormy new year with political tension and uncertainty, and Spain will be left without their leading breadwinner (See Figure 6.) 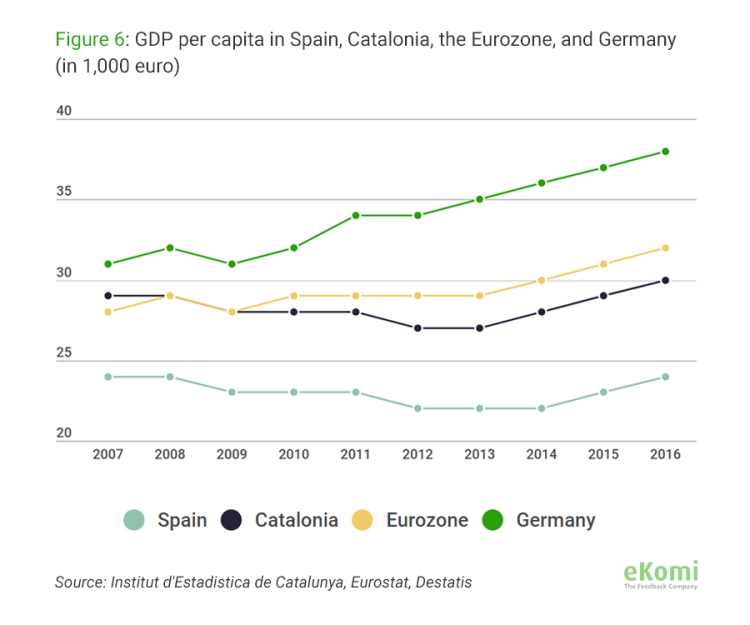 Despite the uncertainty, according to official statistics, Spain’s footwear industry and the nation’s economy is currently picking up momentum. Spain’s investment strategies seem to be paying off as more spending on machines and artificial intelligence has increased production and reduced labor costs. This investment in A.I. saw a growth rate of 1.9% in the last quarter and is the most growth the A.I. sector has seen this year so far.

For further information schedule a call with us here.

Previously in this series

Exciting news: eKomi - The Feedback Company just acquired 100% of Dutch market leader Klantenvertellen from Youvia. This means over 9.000 new customers in the eKomi Group & a fantastic new team in the Netherlands!
Loading Comments...
Comment
×
<span>%d</span> bloggers like this: