This edition of StarInsights will focus on the United Kingdom’s gold market, while also concentrating on the effects of Brexit on the price of gold.

The price of gold soared as news spread of Britain’s decision to leave the EU. In 2016 after the Brexit vote, gold rose to its highest price in over two years, and bullion is up roughly 19% when compared to the sterling. This is due to the uncertainty and risk that investors fear as Brexit negotiations take place. For gold to rise at times of political uncertainty is not uncommon. During the Global Recession last decade, gold peaked at $1,898 per ounce. However, as recovery spread throughout the world, the price of gold decreased but has remained relatively high since.

The common rule for gold is that it’s an alternative to paper currencies. So when the dollar is doing well, bullion performs badly. Surprisingly, unlike Brexit, America’s election of Trump saw a decrease in the price of gold. Despite being an unexpected political shock to the world, investors were optimistic about Trump’s plans to cut taxes. Initially, investors believed that tax cuts would revive a sluggish American economy leading to an increase in interest rates thus driving the dollar price higher.

In simpler terms, buying gold is a bit of a pessimistic bet that events escalating across the world will go very badly. However, as political relations such as Russia and Syria, The United States and North Korea, and civil tensions in the Middle East and Africa continue to unravel, can you really blame the “goldbugs?”

Ironically, one of London’s nicknames can be used as a metaphor for the city’s current economic and political uncertainty. Infamous for the large amounts of fog in the city, London has become known as, “The Big Smoke.” As Brexit negotiations continue, there is an abundance of fog surrounding London’s economy and future. As pressure rises for government to make a deal by the March 2019 deadline. You can expect the price of gold to fluctuate immensely.

Companies and firms based in London are already beginning to panic at the possibility of no deal being met between the U.K. and the EU. With the U.K. government’s slow and unsteady process in regards to Brexit so far, bullions should expect for a tremendous shock to the market regardless of the outcome. If Britain leaves the EU without any deal at all, you can expect gold to most definitely thrive once again.

This edition of StarInsights will highlight the United Kingdom’s Bullion Industry. 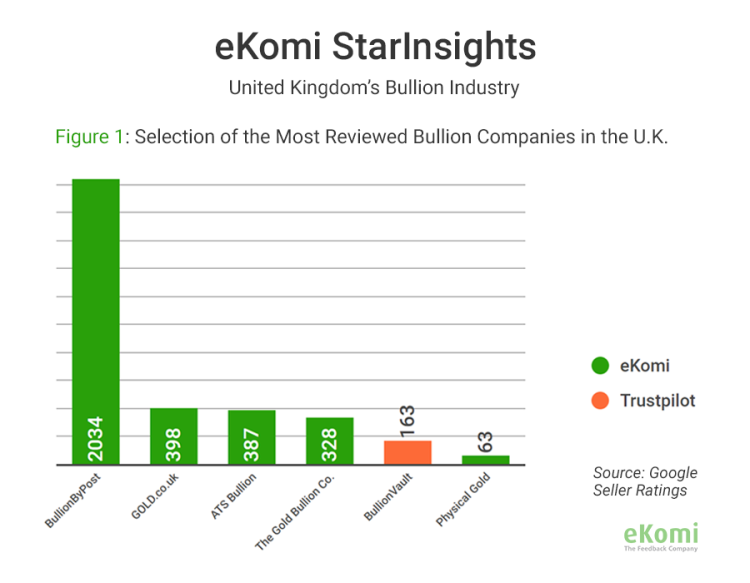 BullionByPost is the United Kingdom’s Bullion Industry leader for this edition of eKomi’s StarInsights. With 2,034 reviews collected and a rating of 4.9 out of 5 stars, BullionByPost is above and beyond the rest of its competition.

Following BullionByPost is Gold.co.uk with 398 reviews collected. The company also earned an impressive average rating of 4.9 out of 5 stars. Following next is ATS Bullion with a star rating of 4.9 as well.

Of the leading bullion companies in the U.K. selected for this study, only one was not a partner of eKomi. Trustpilot’s client, BullionVault, received 163 reviews this past year. Within this industry, eKomi has an overwhelming majority of total reviews collected. eKomi gathered more than 3.210 reviews this past year, while Trustpilot gathered 163. (See Figure 3)

Finishing in 4th is eKomi partner The Gold Bullion Co. with a star rating of 4.9 and in 6th is Physical Gold with a rating of 4.7.

There are several companies not featured on this edition of StarInsights because they are currently not collecting reviews and ratings. Among these companies are London Gold Bullion and Sharps Pixley.

We hope this report will continue to foster the importance of reviews and ratings within the bullion industry and help promote the use of innovation to contribute to the economic and social development in the United Kingdom.

Ensuring the long-term success of our partners is the highest priority. eKomi’s mission is to combine our future-focused vision with our partners’ strategies so that they are prepared for the economic, political, regulatory and market shifts that are coming to shake-up the bullion and gold industry. We put our partners in the position to capitalize on technological innovations and changing consumer preferences to safeguard their future success.

The following is a strategic roadmap looking forward to the future. As 2020 approaches, this roadmap will help executives within the bullion and gold industry come to grips with the challenges they face ahead.

1. Create Strategies that are Resistant to Shocks within the Market

Shocks within the market are becoming increasingly unpredictable. As previously discussed within this article, political shocks such as Brexit and a new Trump administration proves that anything is possible in 2017. However, especially in regards to gold, executives with a clear vision of the future will be the ones who find success in 2020 and beyond.

Considering the importance of gold in the bullion industry, it is important to always be prepared for the “worst-case scenario.” Anything can happen in the market, and the businesses that are able to think and act quickly will build a level of resilience for their business that will give them a competitive edge. It is also wise to make sure everyone within your organization is on the same page and that there is a clear level of transparency across all levels.

eKomi cannot put enough emphasis on the importance of using the data you gathered from customers to your advantage. We encourage companies to follow our lead by making sure that the customer is the most important part of any business. At eKomi, we help business leaders prepare for the opportunities that are ahead in the near future. We empower our partners to act in the customer’s best interest in mind and use their insight to develop engaging strategies.

When looking at the bullion industry, a great step to using your customer insight would be to ask your customers why they are purchasing or selling in the first place. Is it due to a political shock, personal finances, or just to be safe in this day and age? Is this the customer’s first time buying or selling bullion? Gaining this kind of insight can be a crucial step for your business to take advantage of trends within the market.

For more information about eKomi Solutions, schedule a meeting with us here.

Exciting news: eKomi - The Feedback Company just acquired 100% of Dutch market leader Klantenvertellen from Youvia. This means over 9.000 new customers in the eKomi Group & a fantastic new team in the Netherlands!
Loading Comments...
Comment
×
<span>%d</span> bloggers like this: